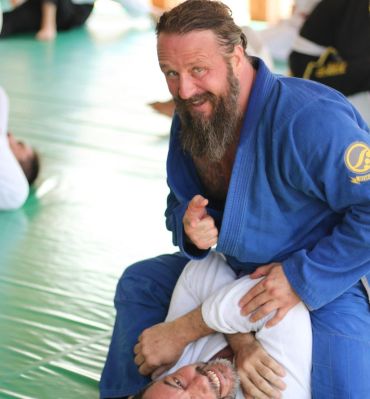 To look at Steve you’d never think that entering High School he was 120lbs soaking wet. Couple that with being a 5ft nothing introvert and you get the perfect target for a bully. Steve’s love for martial arts grew out of a practical desire for self preservation.

First trying Shorin Ryu Karate at a young age, then switching to TKD in his 20’s, Steve never quite found what he was looking for until in 2007, a friend told him that a Black Belt in Brazilian Jiu Jitsu was teaching in the area. Remembering Royce Gracie’s dominance in the first few UFC’s, Steve always wanted to train BJJ but there hadn’t been a school available locally, until then.

Signing up for an introductory course as soon as he could, he jumped in with both feet to the first martial art that actually made sense to him.

Within 6 months of signing up, Steve had the unfortunate happenstance to have to use his limited BJJ skills. The techniques were concise and effective and made Steve think to himself in the moments after, “That actually worked, and well!” The practical, real world application was an epiphany and only solidified what Steve already knew; Brazilian Jiu Jitsu is the best self defense based system and he hasn’t stopped training since.

Steve is also a Professional Musician, Avid Surfer, Caster of Pods, Lover of Dogs and Master of Sarcasm.