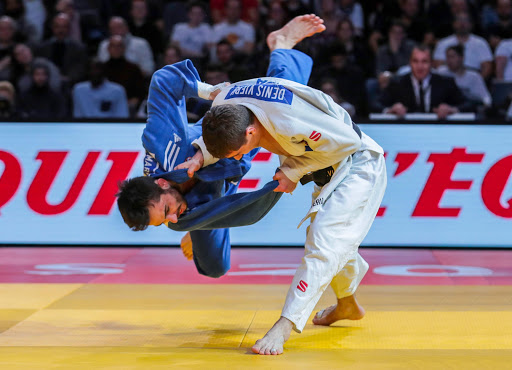 Judo (柔道) is generally categorized as a modern martial art, which has since evolved into a combat and Olympic sport. The sport was created in 1882 by Jigoro Kano (嘉納治五郎) as a physical, mental, and moral pedagogy in Japan. Judo's most prominent feature is its competitive element, where the objective is to either throw or take down an opponent to the ground, immobilize or otherwise subdue an opponent with a pin, or force an opponent to submit with a joint lock or a choke.

Judo is practiced by millions around the world and deemed an official Olympic sport since 1964, Judo is a martial arts form developed in Japan hundreds of years ago. First practiced by the samurai and feudal warrior classes, Judo means “the gentle way,” referring to techniques which involve giving way to the force of one’s opponent. In practice, however, Judo is an intense physical sport.

Judo benefits people in myriad of ways, including:

At Kroyler Gracie Jiu-Jitsu's Judo Program you can expect the best instruction and great experience through Nathan DeCamp. Nathan is a complete and true martial artist, having started his martial arts career at 11 years old. Nathan went on to train and become an adept martial artist in all the styles he has practiced in, from Taekwondo and Boxing to Wrestling and Judo and now Brazilian Jiu-Jitsu. Nathan has competed in all the modalities he has trained in and now has focused his abilities into coaching. Nathan is the Head of the Jiu-Jitsu Program at Snyder's Dojo in Kalamazoo. Through Nathan the Jiu-Jitsu Program at Snyder's Dojo is fully affiliated with Kroyler Gracie's Jiu-Jitsu.

The Judo Program at Kroyler Gracie Jiu-Jitsu is a fully United States Judo Federation (USJF) accredited program where anyone from the casual/beginner martial artist to the most advanced martial artist can earn official ranking in Judo. Furthermore, Judo is an incredibly useful tool for anyone looking to become a more well rounded fighter or martial artist. Judo will provide you with the most efficient methods to take a fight or altercation to the ground.