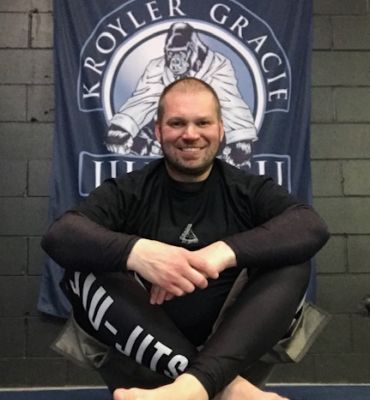 Rich began his martial arts training in 1987 in the Korean martial art of Tae Kwon Do.  He received his black belt in 1989 and began his teaching career in the youth program at his school.  In addition to teaching, Rich competed at the local, state and national level in full contact tournaments and was a 1989 and 1994 Indiana State champion.  After years of competing, Rich shifted his focus to coaching and teaching.  Over his 33 years of martial arts experience, he has trained many students to black belt and coached athletes at all levels of competition, from local tournaments to the Jr. Olympics.  In 1995, he was appointed the Indiana State AAU Referee Chairperson and was responsible for the training, conduct, and quality of the referees at state level tournaments.  In 2015, Rich was promoted to the master rank of 5th degree black belt in Tae Kwon Do.  In addition to this, he holds a black belt in the Korean martial art of Hapkido.

Rich’s love of Jiu-Jitsu began in 1993 as he watched Royce Gracie win UFC 1.  At the time, very little Jiu-Jitsu was available in our region, so Rich and a small group of students began traveling to seminars to train with Royce Gracie.  In 1997, after two years of training, including advanced training and private lessons, Rich was promoted to blue belt by Royce.  Although Rich continued to train and teach traditional martial arts, his focus was on Jiu-Jitsu.  Still without a source of Jiu-Jitsu in our region, he began to train with national Judo champion Charles Hooks, at a local club.  By 1997, Jiu-Jitsu began to explode all over the United States and it found its way to the Midwest.  Rich and a group of students from another academy hosted a seminar with Luiz Filho, paving the way for Jiu-Jitsu to become available in our region.

In 2018, Rich was promoted to purple belt and he is currently the Head Instructor for the Kid's Jiu-Jitsu Program and the Parents & Me Program at Kroyler Gracie Jiu-Jitsu.  In addition to teaching Jiu Jitsu, Rich is a certified Ginástica Natural instructor through its creator, Alvaro Romano.  This Brazilian method of natural body movement and exercise is very beneficial to Jiu-Jitsu training and has helped practitioners maintain flexibility and mobility for over 30 years.  Rich’s desire is to share Jiu-Jitsu with all of his students as well as to continue to work towards his goal of earning his black belt.  His teaching experience over the past 31 years has given him a unique perspective on the art of instructing children.  Rich is dedicated to the personal growth of every student that he teaches and focuses on giving students the ability to successfully defend themselves while learning in a safe and fun environment.