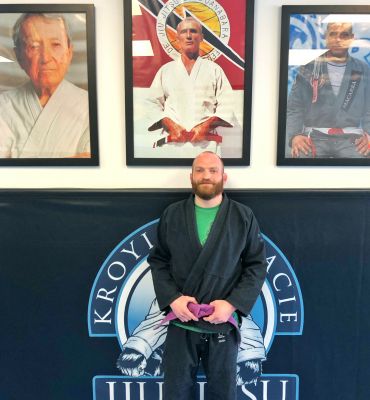 Driven by his growing love for Jiu Jitsu, Clive attended a seminar at his school held by Kroyler Gracie. Clive’s instructor had met Kroyler at the Helio 100 event in Los Angeles, and after the success of his first seminar at Sion, Kroyler was repeatedly requested back. Clive was so captivated with Kroyler’s teaching, he made the decision to leave his lifelong home in Philadelphia and travel more than 700 miles to South Bend, IN to train full-time under the guidance and tutelage of Professor Kroyler Gracie.

Clive’s passion for teaching began to flourish in 2020 when Clive was presented with the opportunity to be Kroyler’s full-time Uke (a Japanese word used to describe a training partner who is “receiving” the technique). The pandemic limited regular classes, so Kroyler and his Uke offered 190 hours of private classes for individuals looking to improve their techniques. Clive was able to absorb as much knowledge as possible, and his desire to be a mentor at the school was realized when he was offered to join lead instructor Rich Smith in teaching the kids’ classes.
Clive has become a hard-working, dedicated, and lively member of the Kroyler Gracie familia. He was awarded his purple belt in late 2020, and he is ecstatic to begin his journey as an instructor.

Outside of the school (and inside, really), Clive is an avid cereal and sweets consumer and reviewer. His reviews often feature his highly photogenic cat. His top 3 favorite cereals include Waffle Crisp, Honey Oh’s, and Cinnamon Toast Crunch.